This is a story that goes back thousands of years: the Grands Causses is a land where humans have been farming, breeding sheep and making cheese for nearly 5000 years. If you meander your way through the Causses and the avant-Causses and take some time for a closer look, you will catch glimpses of very old signs of a pastoral activity.

FOLLOWING THE TRACES OF SHEEP

The story begins somewhere around 4000 years BC with sheep herding people who left us fragments of cheese strainers and vases with holes in them. They started to take over the environment through intense land clearing. During the Middle Ages the Templars first and then the Hospitallers settled on the Larzac and the surrounding valleys and began to structure the activity of sheep breeding. Every part of the animal was used, migou (manure), meat, wool, leather for the glove making industry in Millau and milk used for the Roquefort cheese which was made in cabanes (wooden shelters) and matured in outfitted caves such as the ones of the Combalou.

In 1925, the veined cheese was recognized as an “Appellation d’Origine Controlée” (Controlled Designation of Origin) with the Roquefort caves as a unique place of maturing, and a set of specific rules for its production.

The protection of agropastoralism, this longstanding and unique expertise, is rooted in the struggles of the peasant farmers which occurred during the 1970’s.

During the Middle-Ages, the expanding herd sizes and the grazing of sheep contributed to the shaping of this unique landscape made of dry lawns, trails and large ingenious buildings. The brillance of agropastoral practices is displayed everywhere: clapas (stones piled up after they were removed from a field), drailhes (trails used for transhumance - the seasonal movement of grazing sheep), buissières (narrow  passages between two lines of box-trees which define the drailles and  provide the herds with a protection from the summer heat and the winter winds), lavognes (natural ponds with a clay lined or paved bottom that collect rainwater for the sheep to drink), cazelles (small buildings built in dry stones, sometimes fitted out in a low wall and which provides shelter during bad weather), sheepfolds, jasses (part of a farm or single isolated building on a trail), Quilles de berger (turrets in dry stone which enable shepherds to watch over their herds and can be considered as an artistic expression similar to land art), water systems, caves for the maturing of cheese. All of these are invaluable evidence of the structuring ofthe landscape over the millennia. 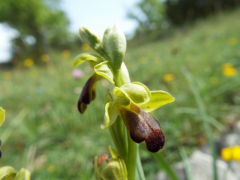 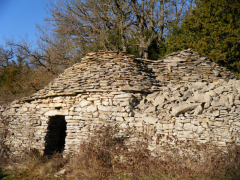 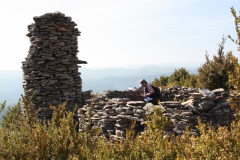 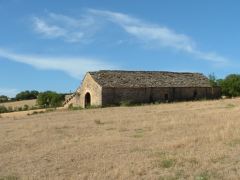 Despite the seemingly rough nature of the land, the inhabitants have been able through their work to fit effectively into the environment. The modern farming activity still drives the wheels of the region. This subtle blend of tradition, modernity and adaptability has allowed the Causses et Cévennes territory to be classified as a UNESCO World Heritage site as part of the "organically evolved continuing Mediterranean agro-pastoral cultural landscape".

The Tourist Office as an Ambassador of the Causses et Cévennes territory is committed to helping you discover landscapes and buildings shaped by humanity over the centuries.

Did you know that a whole range of ancestral expertise is required to produce the Roquefort cheese? From its origins the essentials of the cheese have been preserved: respect for the living here and for the environment without stifling economic development.

What does the Rayon de Roquefort mean?

It represents 1800 farms and 800 000 sheep of the Lacaune breed located within a radius of 100 km around Roquefort. The Rayon is above all an economic activity and an agro-pastoral expertise pooling sheep-breeders, farmers, cheese retailers and cheese ripeners in accordance with the written specifications of the Protected Designation of Origin (In fulfilment of the 1925 Designation of Origin).

THE ROQUEFORT PROTECTED DESIGNATION OF ORIGIN

Sheep are very demanding and need to be milked twice a day from November to August in the dairy catchment area which partly covers 6 departments. Every day, fresh and whole milk is taken to one of the eight dairies. Which is where a microscopic fungus called Penicillium roqueforti comes in. it is grown on rye bread and added into the milk during the curdling process or when the curd is placed in the mould. This fungus provides Roquefort with its typical blue-green veining. Thus curdled, inoculated and molded, the milk gives the “loaves” of cheese their final form.

The “loaves” are then sent to the village of Roquefort at the foot of the Combalou cliffs to be ripened by one of the 7 manufacturers during a minimum of 14 days in caves that are ventilated by natural faults in the rock. The ivory body of the cheese matures with a blue-green veining and becomes creamy. The slow maturing process at low temperature requires a minimum of 3 months to gain the aromas that give the Roquefort cheese its unique style and flavors. 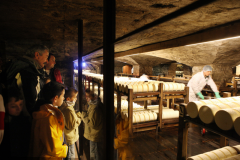 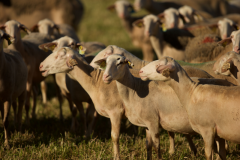 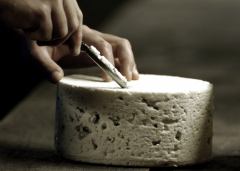 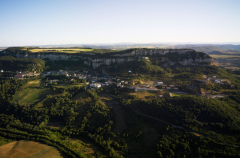